Currently, we work with 9,500+ children in 85 pre and primary schools (49 built by KHEN) and 6 lower secondary schools based in 14 communes in the Battambang districts of Samlout, Rukhak Kiri and Rattanakmondoll (in the below diagram referred to as Samlot and Rokhak Kiri). These are remote areas of Battambang Province. ​All of our projects focus on education within rural/remote areas where KHEN believe most barriers to child education exist. Kaoh Kralo, Rattanak Mondol, Moung Ruessei and Sampov Luon are being under the need assessments to become  a near future target districts. 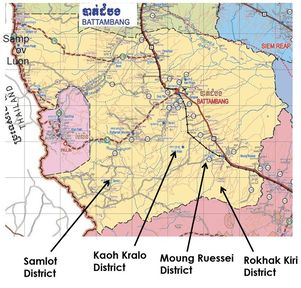 Why We Work Here

We work in these rural and remote districts because we believe that all children should have access to education and their other rights, no matter where they live. Education for children in these areas is limited or non existent compared to urban / city areas because they are so difficult to reach. Support from both the government and international funders is also limited or non-existent in these areas and this inequality with urban centers is reflected in the UN Inequality-adjusted Human Development Index (IHDI) for Cambodia which is almost 25%.